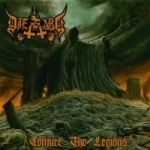 The deathrashing Swedish bastard is back. These 3 horned little Beelzebubs from Uppsala, Sweden, named their band after the VENOM song – and ever since the band has kept things relatively busy, even release-wise. "Conjure The Legions" is just DIE HARD’s 2nd full-length studio album, and it surely is a tad better yet more solid sounding effort than its predecessor, the band’s 2009 album "Nihilistic Vision", was in my opinion. In a way, the Swedes in DIE HARD follow the same way that the Arlington-based Death / Thrash combo DECEASED chose for themselves in the late 80s; also having much the same in them what made Rick Scythe’s ex – band USURPER and recent group SCYTHE, such special and highly appreciated true Metal bands among – eh, true Metal people, if we just want to put it this way. On "Conjure The Legions", DIE HARD prove right off the bat that they have the fuel, the fire and the will to success, and perhaps eventually even – and hopefully, possibility to gain some respect and admiration among people that have some understanding to the style what they do. It’s no denying that there’s something very captivating yet magnetic in DIE HARD’s nostalgic sounding old school Thrash and proto Death Metal here. Whenever you decide to spin the disc, it never ends to just one round. It’s not hard to admit either that DIE HARD’s style doesn’t bring anything new on the table but then again, why it should in the very first place? I for one, am fully pleased with how they sound; straightforward, energetic, violent and shamelessly old school that doesn’t make any excuses. There’s 9 songs on "Conjure The Legions" (some edition of this should also have ‘Under The Blade’ by TWISTED SISTER as bonus; mine promotional version did not) that give a serious old school kick to our butts – and damn we like it, don’t we? Fans of especially DECEASED, USURPER, SCYTHE, WITCHERY, VENOM, SODOM, etc., take a note of this – and whatnot, all other so-called true Metal fans as well. To get more information about DIE HARD, go to: www.diehard.se, label: www.agoniarecords.com