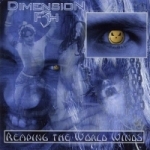 What originally was only intended to be a solo project by LIMBONIC ART’s Morfeus has turned into a full time band now as Limbonic Art unfortunately is no more. So, the most important questions obviously are: will DIMENSION F3H still satisfy the needs of all the remaining LIMBONIC ART fans? Will this band be able to live up to the high standards set by its mainman’s previous musical outlet? Well, it’s really hard to say, cause even though there’s some typical elements to be discovered again, DIMENSION F3H still heads into quite a different musical direction. If you mainly liked LIMBONIC ART for its Black (or later Death) Metal elements, you might be disappointed, cause vocalist Nesmoth (ex – Arch Nemesis) exclusively sings in his normal clean voice (with some additional high screaming in the background). The symphonic elements, that were always quite a big trademark for LIMBONIC ART, are still very much present in DIMENSION F3H though, with the major difference here probably being the use of a real drummer (Stian “Thunderforce” Kristoffersen from Pagan’s Mind and Trivial Act). The album features nine tracks as well as two very moody, soundtrack like instrumentals and I would say that the overall writing style of Morfeus has become even more complex and weird, in comparison to what he used to come up with in the past. Just compare ‘Paint Me Something Bleach’, which combines a whole lot of different elements in its only four and a half minutes playing time and the following, very intense ‘Mirrorheart’ and you’ll already get a pretty good picture of the band’s big musical variety. It also seems that the non Metal influences got increased quite a bit nowadays, with an even stronger focus on Classical music, Ambient, Folklore and modern electronic elements (the album’s instrumental closer ‘Reborn’ is a good example of the latter), but combined in a rather powerful and intense manner (just like in LIMBONIC ART). So, all in all definitely a very ambitious and highly interesting record, which needs quite a few listens to fully get into and therefore won’t necessarily be suitable for the ordinary “bang-your-head-for-Satan” type of Metalhead. All further info you may find at the band’s incredible website: www.dimensionf3h.com