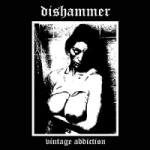 Raw and evil punked out metallic sounds from Spain. Yep, that is the description that fits this release. Then, why it was released by Hells Headbangers when they are more known for releasing Death / Thrash / Black? Well, DISHAMMER could easily pass as a lost HELLHAMMER brother. Everything here oozes a very punkish attitude, from the recording and the production, which is like a very good recorded rehearsal and it almost feels like it was recorded live in the studio, with few takes. Not too bad considering the music is very straight in your face. But it does possess a certain metallic charm, if you know what I mean. The songs are short (around 2 minutes each) and also very straight in-your-face. The lyrics are also more into the themes most Thrash Metal bands do, with songs like ‘Exterminate The Parasite’ or ‘The End Here And Now’. Vocally speaking, it does remind me to early gore Death Metal bands, maybe IMPETIGO can be a loose comparison (probably even the overall sound can also be related). Some other bands that can be related would be early MASTER or for those into punked metallic sounds the band DOOM. And also buried in there you can find filthy rock in the MOTÖRHEAD tradition. Yes, it is filthy as filthy it can be, it has a lot of Punk in there, but it is without doubt Metal after all. The kind of Metal some Black Metal bands tend to play when they rediscover the roots of Black Metal. Well, something like that. I just feel it has too much of Hardcore / Punk sounds to enjoy, and although I like my Metal simple, it just does not click with me. The only song that I think stands out is probably the last one, which gives title to the album, as it has some very noticeable early Speed Metal references. Yeah, DISHAMMER sounds like a trip into the past, but must be approached with caution if you want to hear Thrash it is not, so neither it is Punk or Hardcore, and a lot less Black Metal, but it does possess the essence of them all. Still, this is not something I will be listening more in the future. There are many similar bands in a more metallic style I do prefer and enjoy. www.myspace.com/dishammer, www.hellsheadbangers.com