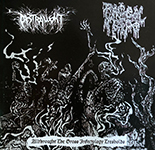 The land where the mariachi music reigned (and still does nowadays), developed one (or should I say two?) of the most brutal and technical bands of Death Grind in the Mexican Metal scene of the early 90s. FAECAL TRIPE was (de)formed in the first month of 1992, in Guadalajara, Mexico. After a few months, they composed a 4 tracks demo tape, entitled “Gross Infectology”, which featured the tracks ‘Horrendous And Nauseating Expulsion’, ‘Sudden Putrefaction’, ‘Gangrenous Repulsion’ and ‘Pulmonary Necrosis’. Here you can enjoy a mix of grinding guitar riffing, obscure bass lines, pounding drum patterns and vomits reciting pathological lyrics. But in the begining of 1993, a few months after their first production, FAECAL TRIPE changed their name to DISTRAUGHT. Having evolved into a more bloodthirsty style, they released an independent demo tape with 5 tracks, called “Allthrought The Tresholds” in November of the same year, where their sound caught a gloominess and velocity that no other group of Mexico (and maybe Latin America) had at that time. It’s necessary to remark that the members of this group were teenagers that acomplished to supurate the social convictions of their time. Some kind of preachers of the Death Grind inconspicuousness. This demo starts with an instrumental version of ‘Allthrought The Tresholds’, followed by ‘Reflected Infraworld’, in the middle ‘Paradigmatic Paranoia’, ‘The Unreal Perception and ‘Cryonizated’ finalizes these must worshipped hymns. The time passed, DISTRAUGHT stayed in the nook of the underground for a while until Vomit Records (a label that has been active since 2017, created by Antimo Buonanno), Mummificated Records (Marco Marin’s label) joined forces in 2021 with the ex – members of FAECAL TRIPE and DISTRAUGHT to launch a compilation of the previous mentioned demos, that is called “Allthrought The Gross Infectology Tresholds”. The cover was made by FluxOfDeath and the material was mastered in Utter Silence Studios by Jon Mondragón, who did a great job, leaving the escence of the putrified tones with a dirty sound. So, if you are into bands like DISGORGE (Mexico) and INFESTER (USA), you should give DISTRAUGHT/ FAECAL TRIPE a chance. More info at: www.facebook.com/vomitrecs, reddgmex@gmail.com