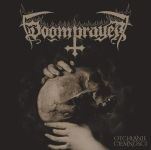 Polish one man Black Metal band DOOMPRAYER has just released their self-titled debut album on Fallen Temple Records. Not much information is found online about the band other than being formed in 2013 and being based out of Warsaw. Lead by mastermind Veltis, the band is set out to be a new generation of Black Metal artists booming out of Poland. Let’s see what these 4 tracks provide to our auditory senses. Diving right into things the first song ‘Chaos’ has a guitar tone reminiscent of MAYHEM’s “De Mysteriis Dom Sathanas” at the start of the song with its haunting hook. The production sounds good, crisp and clear which for a demo really tells you how much attention to detail Veltis oversees. I could also sense a hint of SATYRICON era ‘Shadowthrone’ on this song. Things really picked up with ‘Porządek’ with its catchy tempo and melodic tendencies. This song really reminds me of many of the Swedish Black Metal bands from the mid to late 90s and could honestly fall into that category if no one knew it was recorded in 2021. Good drumming, nice chord progressions and a nice bridge from fast tempo to slow. This is my favorite song on this demo. ‘Upadek’ is up next with its hyper blasting drums and guitar. Here is where we see the band at full speed and expanding their vision of darkness. Pure evil and hate is spewed on here with relentless attack from all instrumental angles, the vocals echoing the torment. The last track is more of an outro that quickly fades just as it is about to peak. This was a solid demo from head to toe. Good production, good song writing that at times had hints of paid homage to Black Metal elders from the 90s / early 2000s. This was not another carbon copy of “Panzer Division Marduk” that just spewed notes at 100000 mph. This was a demo that you can tell took the artist time to format and sculpt / re-fined over time. Well worth checking out as I foresee this band making waves down the road. For more information please visit www.facebook.com/fallentemple666