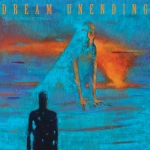 DREAM UNENDING is a 2021 project by Derrick Vella (TOMB MOLD) and Justin DeTore (INNUMERABLE FORMS) and “Tide Turns Eternal” is their first full length released by 20 Buck Spin. At the face value, DREAM UNENDING sounds like a solid Death / Doom band, but you realise it extends greatly beyond what the genre offers. Very reminiscent of some of the early Peaceville sound, DREAM UNENDING weaves harmonies with stories to present them in pristine sounding, wonderfully mixed pieces of poetry. ‘Adorned In Lies’ offers such a spectacular vision into the album, beautiful guitars, brooding waves of harsh vocals which fit into the dark atmosphere, a gentle caress of woe that eventually walks alongside. No, this isn’t a key moment in the history of time, but this certainly is a very carefully constructed slab of Metal brought to life with a definite vision. The atmosphere is as gentle as it is dense, the vocals boom alongside not overpowering the music, the drumming is perfect, there’s not a note quicker, not a note slower. It is a simple time keeping device upon which rests the precipice of expression. ‘In Cipher I Weep’ continues to build vistas of heaviness coupled with soulful melodic solos that accompany you into the mountains of sorrow. I dare say I haven’t heard such melodious guitar parts in a while. Often, we see bands putting together absolutely shitty continuation of spectacular musical pieces but DREAM UNENDING does everything right here. They build their story slowly and steadily, there is not a moment of weakness anywhere, it is an absolute treat to listen to some of the sections of the music on this album. Give “Tide Turns Eternal” some time, the sounds mix the aesthetics of interstellar mnemonics with human sorrow sweetened by beautiful melodic outtakes of instrumentation. ‘The Needful’ is a prime example, although falling into the regular realm of known rhythm, the song stands on its own, the vocals take charge and lead the journey. Though the guitars initially blend it, it’s towards the end of the track they simply shine providing a beautiful view. ‘Dream Ending’, track #5 on the record, is the longest track, clocking in at just over 11 minutes. The song focusses on standard riffing, but the execution is top notch! It’s very well engaging till it suddenly breaks down into a gentle melodious strum of the guitar mimicking a flowing river. The second part of the song kicks off with a gentle descent with the guitar taking center stage initially and sticks to the same harmony in the background. One would wonder how harsh Death / Doom growls work with such an approach, but listening to it seems effortless and automatic. DREAM UNENDING surely has released a beautiful record which will appeal to a wide variety of fans. If you like Doom Metal or Death Metal in any shape or form, this is for you! Highly recommended. For more information, please visit: www.facebook.com/20buckspin, https://listen.20buckspin.com/album/tide-turns-eternal