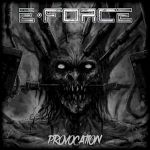 E-FORCE was founded in Montreal, Canada, by singer / bassist Eric Forrest after retiring from legendary Thrash institution VOIVOD. Eric (vocals, bass) appeared on two studio masterpieces, “Negatron” (1995) and “Phobos”(1997), on the compilation “Kronik” (1998) and the live album “Voivod Lives” (2000). After departing VOIVOD, Eric used his nickname “E-Force” as the name for his new band, and since its formation around 2001 to now, they built a formidable discography. A handful of demos, the debut full-length “Evil Forces” (2003) and its follow-ups “Modified Poison” (2008), “The Curse” (2014), enticed loads of ears and minds in the past 20 years. So, curious minds can ask or be left wondering, why these guys’ names aren’t so widespread. Only one possible answer could be their outlandish and non-conformist style. Yet, exposed one knows, their inherent ferocity and hostility, in fact, everything a Thrash fan should desire from an inventive Thrash metal record. Certainly, the sporadic pattern of their releases helped them to remain in the shadows, and also varied experimentations led by the power trio, which was never specific only in the Thrash genre, made them interesting. Now, upholding their nature, five years after releasing “Demonikhol” (2015), E-FORCE returned with their fifth full-length “Mindbender”. Without any delay, this record starts like surprising wildfires. ‘Provocation’ and ‘Traumatized’, both will greet like snarling monsters and then the wonderfully spacey sci-fi touch of ‘Hellucination’ will give a strange and darker feeling. Here the effects, reminiscent of bearing noises and Eric’s reverberant power vocals, can quickly make this groove monster a favorite. This will establish once more, even past of his heydays, Eric Forrest is such an original force. The wild ride continues with ‘Hypnotic’ and its mind-bending riffing, straight forward rhythm work and gurgling vocals will ask for many listening recurrences. ‘Future Past’ will certainly raise eyebrows, which is like a dark nightmare of notes – as if striding through a mire. Then the coming title track ‘Mindbender’, ‘Dehumanized’ and two the kickers ‘Delirium’ and ‘Deranged’, will tear apart any lethargy if you may feel on the up and highly reflects their VOIVOD connection. If those were not enough, this little over 50-minute record befittingly ends with an E-FORCE style cover of ‘Insect’ from the VOIVOD classic “Negatron”. Altogether “Mindbender” exudes certain darkness, yet the melodies are crisp and quite thrashy. The production is loud and energetic, which paved the mid-paced, as well as aggressive bass and guitar inter-plays. The drums patterns also blow in nicely behind all eleven tracks and manage to uphold the bizarre time signatures and unpredictable movements. Surely, Forrest’s hoarse vocals and rancid screams transmit a constant atmosphere of anger, despair and nightmare. Yet, to bring out the only softness, they also remain static and not offered diversity in parts and places. But heck, this veteran force is no longer a D-train. With all these, “Mindbender” is surely another massive lump of rage from the E-FORCE trio, which, despite all its penetrating power and supposed straightforwardness, reveals many details and facets that you may only discover over time. So, this collaboration certainly deserves more attention as do VOIVOD and its obscure outputs. And it will get many rotations by anyone who appreciates experimental Metal from the nineties that walks off the beaten path and for any devotes of Eric’s cult lineage with VOIVOD. “Mindbender” is out now in digital, CD and LP formats via Mighty Music. To find out more about the band and label check www.reverbnation.com/eforce or www.facebook.com/mightymusic666