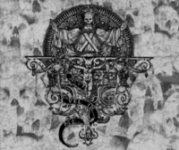 Debut album for this Polish trio with quite a sick name… oh, well. As much as I worship Death Metal, sometimes I feel that most bands just fall short of what they can really do. That’s the case with EBOLA’s style of Death Metal. It is quite well played, it does possess a good recording … and yet I feel it is a bit sterile… a bit flat… and at times it sounds without power. One of the causes for this lack of power are the vocals. Although not the typical cookie monster as there is some certain variation here and there (due to the fact of shared vocals), I just think they sound forced. Another cause of why I think that this is not as good as it should might be is because of the production. I already stated that it is quite good, but in all I think that there is a lack of bass frequencies, and that takes away power, even if the guitars are upfront as I usually like Metal music to be, it all sound like treble and middle frequencies but almost no bass. The last thing that takes away this vital force of darkness is that the drums needs to have a more powerful presence. Speaking of the music, bands like BOLT THROWER and early MORBID ANGEL could be a reference although I can hear a bit of early MASTER too. Little by little I am finding things that turned this recording a bit better, but at the end I feel this owes me something. As important as the first impression is, I also find interest in bands that have so much in their music that you need more than one listen to fully appreciate it. In this case I just didn’t found anything new, but I started to adjust to the bit soulless production, concentrating more on the music. There are certainly good songs like ‘Unholy Prophet’ and ‘Desecrated Messiah’ which exposes us to some old school Death Metal, with very competent solos. At just under half hour, and getting better by the end of the disc, I can foresee a deathly future for the band. Fans of old school Death Metal will find something here, and if you can pass the production details that takes away the power this band does possess, it will have a reward. www.oldtemple.com, www.myspace.com/eboladeathmetal