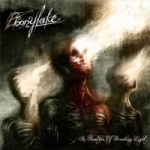 EBONY LAKE hails from West Yorkshire, UK. The band features two friends – Ophelius and Mass, whose twisted musical incarnation EBONY LAKE is. The guys’ debut album, titled "On The Eve Of The Grimly Inventive" was released on the famous Cacophonous Records in 1999 – and the record received a fair amount of critic, both in good as well as in bad. 12 years later, their paths were meant to cross once again. "In Swathes Of Brooding Light" is their 2nd, 10-track full-length studio album, and it’s labeled as ‘No Easy Listening / Avantgarde Black Metal’. After the first spin of the band’s 2nd opus in question… I am all questions marks. After 2nd, 3rd, 4th, 5th and a few more visits to this record… I was still surrounded by heavy question marks around me, making me to think whom this stuff is actually targeted to, or made for? I thought given time, it might be a ‘grower’. Well, I can openly assure you now – with a relief, it wasn’t. In fact, far from that… You like a total mishmash of distorted cacophonies? If so, then by all means get this album for yourself, as that’s exactly what it is full of. Next please… www.myspace.com/ebonylakeofficialuk, www.lesacteursdelombre.net