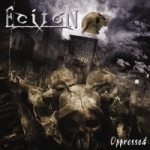 This album took me completely by surprise, because let’s face it, I was totally unaware of the existence of this Danish quartet dedicated to pure Death Metal before. And believe me, I am more than happy for having discovered this band, because “Oppressed” offers all that a rabid fan of classic Death (like me) could dream of. This kind of record is more and more rare these days, considering that the vast majority of well marketed Death Metal releases are about pure showmanship and demonstration of dexterity (let’s call that the “HATE EterNILE syndrome”) instead of offering actual good songs. If you dwell in the memory of albums like “Harmony Corruption” and “Butchered At Birth” then rejoice, because “Oppressed” stands at the crossing of these two, especially the vocal performance of Jesper Baeck evokes a mix of those of Chris Barnes and Barney Greenway (early 90s period). All the songs are rather compact and to the point, no useless dissonant guitar “solo” here, only a pure onslaught of razor-sharp and crunchy riffs. ECITON don’t base their song writing on one-dimensional ideas nor over-complex extravaganza. They privilege tightness above all, yet with rhythm changes aplenty, and the result comes out very convincing to say the very least. The fact ECITON is a four piece, with only one guitarist in action, adds even more efficiency and cohesion to their sonic attack, and impeaches them to lose themselves in the labyrinth of sterile experimentation. Add to this that the line-up doesn’t feature newcomers in music, that explaining the kind of authentic patina perceptible on “Oppressed”. Like I suggested above, here is a slab of classic Death Metal of which the brand is almost extinct now (2005). You can even said this one has been produced by Scott Burns, so much the sound is fat and crisp in the better of the Morrisound way. So, if you are up to a dose of exhilarating nostalgia, get “Oppressed” without delay. ECITON is truly a killer outfit, trust me on that! We need bands like this one! AWESOME!!!!! www.eciton.dk.