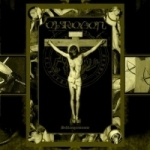 End of April 2010 the sky has turned black again because Germany’s finest extremists EISREGEN are ready for the next deadly strike to show the surrounding government institutions that there is no limit to the limit. Several years have past and EISREGEN have survived further attacks to return stronger than before. Needless discussions are surrounding this German act since the release of their famous “KK” album in 1998 and a lot of people are ignoring the fact – in favor of the extreme harsh lyrics and the national ban within Germany – that the musical essence of this band can be found in its purest form on this still outstanding release. For their latest output”Schlangensonne” the band has collected further nice and interesting stories about the skeletons in every closet. So lyrically all EISREGEN fans will get 100% what they expect from nice “lullaby” stories (‘Kai aus der Kiste’) up to the ugly side of war – spiced with the typical EISREGEN humor. But musically the band has worked quite hard on additional diversity with further traditional Metal influences and the music is raging from Black Metal on one side of the extreme up to more industrial based songs. The band is talking about their strongest release since years, a statement which I can easily support. EISREGEN are EISREGEN and within our small scene they deserve their special reputation and a release like “Schlangensonne” is only supporting this fact, so let’s end this review in their typical way – Gepriesen sei der Untergang! www.massacre-records.com, www.fleischhaus.de