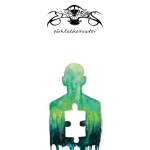 A record I can’t say something incisive about. And all I want is to make it quick cause I am getting pissed the more often I need to listen to “Wirklichkeitsraster”. A raster is more or less a graphic pattern of lines to put on a picture, an area or in this case the Wirklichkeit(reality) to technically dissect it. What a “Wirklichkeitsratser” suppose to be, I can’t tell. But it seems to be a deep thought. If you think about it twice, you will figure, even if you think about it the fourth or fifth time, it still won’t make a philosophical sens. Anyway I don’t really care cause the music is still running and I want to get it over with. EKSTASIS are mixing cheesy harmonious riffs with simple attempts of disharmonious melodies. So simple and uninspired that I can’t even get bored. Enriching the whole preciousness with over and over repeating keyboard melodies. Which surprisingly don’t get interesting even if you repeat them till worlds final end. And because there is no deeper considered structure in their songs it seems like it’s just one long boring song. Fast, slow, fast, slow and fast again. By all the thoughtfulness they kinda forget to record the drums in a way drums they might should. Which in the end sound like they don’t really like the idea of having drums at all. But I guess that’s what progressive means. I save my words about the vocals and lyrics. To set the sens: it’s very profound and arcane. I am sure there are a enough people out there which get captivated by lame nonsense philosophical attempts at walking. Have fun with EKSTASIS or their label, Geisterasche Organisation, and all of their mysterious spirits at: www.facebook.com/gedankenort, www.geisterasche.de