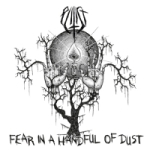 ELITIST
Fear In A Handful Of Dust
(Season Of Mist)
34:41min

A magnificent triumph of a debut for band and label alike, "Fear In A Handful Of Dust", by ELITIST, a band from Portland, Oregon, a city with a laudable Hardcore and Metal scene, proves not only that Portland is a city to watch, it also demonstrates that Season Of Mist have a sweet tooth for Death Metal done right. Indeed, this tooth enjoys a life of its own, ELITIST being a recent choice of the Underground Activist Division, a sub-label (I guess) within Season Of Mist. They chose wisely. Eleven tracks occupy this album, and all make sudden stops from a fast, galloping drum beat, to a slow, ominous boom, similar in sound to human skin, stretched over bone-drum. A deep AUTOPSY influence is at work here, but there’s scant wrong with that. The mid-ranged guitars remind us of ENTOMBED once upon a time. Thus, this band ELITIST, at least so far as we can judge from the music, talks the talk and walks the walk. Their album is loud, dingy, cold, dank, and so obviously wonderful and worth your time. Not for wimps!!!! www.season-of-mist.com