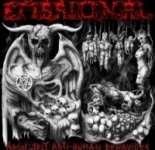 Today, VADER fights for the title of “most visible Polish band” with the likes of BEHEMOTH, DECAPITATED and HATE. Between them, these four bands, in this reviewer’s much learned (yeah right) opinion, typify the Polish scene: overtly satanic and anti-christian themes, incredibly dexterous, blasting drumming, and more or less ordinary Death Metal vocals. I think the Polish bands have always borrowed more heavily from American bands like DEICIDE and MORBID ANGEL than any other country’s bands, but even supposing that that’s the case, there are still many more influences to list. But that’s beside the point now. EMBRIONAL will not cause your jaw to drop and your ass to sag to the floor in wonder. Those listening experiences grow fewer and further between. But, they can get your neck whipping as well as any other. Songs such as ‘Disgraceful Enslavement’ and the title track, ‘Absolutely Anti-Human Behaviors’, pummel their way through your speakers. Another song and a couple of instrumentals later, and the album’s second half commences. The fun, but rather unremarkable song ‘Maniacal Madness’ kicks things off after the last instrumental, but the songs after that, which include, ‘Bestial Torture’ make it interesting again. Sounding unlike any other song on the album, ‘Bestial Torture’ is not only dark, it’s technically impressive as well, much like the way RIPPING CORPSE and DIM MAK combine precision and complexity with a vicious disposition. Contrasting and yet also complementing that, ‘Dismal Sing’ is complex in structure but slow in pace; more of a stationary headbanging song, not something you’d necessarily want to break faces to. After ‘Bestial Torture’ my favorite on this album has to be ‘Mankind’s Decline’. The song is simply too well written to ignore, and employs an addicting amount of Trey Azagthoth-like harmonic wizardry from MORBID ANGEL’s “Formulas Fatal To The Flesh” era. In some ways this album is a head scratcher because the artwork, replete with demons and pentagrams, signals that the album contained therein will have a more feral, old school DEICIDE kind of feel, but instead we’re given something that’s still brutal, but not quite what you might expect from viewing the cover art alone. Still, well worth checking out. www.facebook.com/embrional, www.oldtemple.com