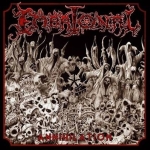 EMBRIONAL from Poland has been perpetually underrated. But the music is so good that Old Temple Records from that country re-issued the band’s demo from 2007. But let it be clear that good music doesn’t have an expiry date. The Death Metal music on the demo is just as potent now as it was back then – it’s raw and grating but extremely vicious and gnarly. It’s reminiscent of early DEICIDE crossed with the brutal leanings of the band ROTTING from Canada. Ultimately, this is powerful and pulverizing music serving the purpose better than most of the faceless and soulless bands of today. This one smashes their skulls in and all their plastic features. It’s not just arbitrary Death Metal music – the songs are well-paced and balanced, somewhat brutal but reeking of pure Death Metal than anything. It’s without any real frills or high-octane blasts. The vocals are low guttural croaks, if you can imagine that sort of thing. The music smacks of the underground aesthetic and neither the band nor the label has done anything to improve the sound clinically. The raw essence is left for the ballsy fans of this style and that’s one of the highlights of this release – the sound comes together on its own and presents the music in all its undiminished glory and might. The whole music is covered with a layer of grime – intrinsically as well as externally. If you were to lift the cover of the raw sound, beneath it you’ll still find ugliness and darkness in the compositions. What’s surprising is that the 30-odd minutes of live material added to this release as bonus is better sounding than the demo material. That’s just as well. You have like two releases for the price of one – the 2007 demo is vicious, whereas the newer live songs showcase a different albeit extended personality of the band which is far more intriguing. It has slower moments reminiscent of DEATHSPELL OMEGA and the abstract charm that comes along with it. EMBRIONAL, however, keeps it effective and coherent and everything on this album is palpable, the intensity as well as the inherent darkness. This should appeal to any seasoned fan of Death Metal because the characteristics are intact and so is the underground essence. www.facebook.com/embrional, www.oldtemple.com