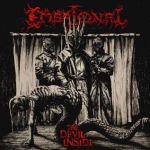 Poland days at VFTDS. Always worth a journey, to feel the magic in-between Bigos, Lech, mustaches and a very diverse and sometimes valiantly Metal scene. But let’s skip the stereotypical nonsense and discover EMBIRONAL’s latest album. And as if they had known it is all about the devil inside. Because it is such a complex album they released. It’s been labeled as a Death Metal album, which would underrate the situation. Three years after their last album, they took a step further into the dark. From “Absolutely Anti-Human Behaviors” which appeared in the garb of straight Death Metal they transformed their style to a more Black and technical Death cocktail. For the good? I can’t really tell. Maybe a bit too ambitious in a way of stuffing components of everything possible in the songs. For example, mixing the dark Black Metal atmosphere with weird beat-down parts could be a reason for incomprehension. It’s not like they totally get on the wrong track by trying to create something special. It’s more like the guitarist is the main spin doctor and everybody just loves his skills. So they let him run free. An adventurous act between getting annoyed or being surprised and captivated by the clutch of ideas. But it’s technically well done and provides the opportunity to discover a lot. Nevertheless EMBRIONAL is a band you should check out if you are into the newer Death / Black Metal. Smacznego! www.facebook.com/embrional, www.oldtemple.com