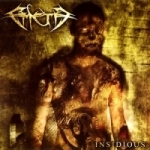 I discovered these guys through the excellent “Face Your Underground” compilation series from our dedicated fellows at www.DeathMetal.be… EMETH were featured on Vol.2 with the track ‘Catatonic Entanglement’, which made me pretty curious already, so I contacted them for some more material right away. Even though the band is already active since late 1997, it took them several line-up changes until they were able to play their form of relentless, brutal Death Metal in March of 2001… But in September 2003 they finally ended up recording nine tracks of their own at the famous Excess Studios for what was to become their debut album “Insidious”. The result is a real merciless onslaught and definitely another perfect choice as the ultimate soundtrack to armageddon! Judging EMETH just by the material on offer here, they are without a doubt one of Belgium’s most uncompromising Death Metal hordes of all time! Their music comes really close to a battleground, with the drums being the machinegun fire, while the heavy sounding rhythms detonate like bombs in your speakers and the insane, savage riffing is crunching everything in sight like a tank on a rampage! You’ll easily notice that we’re dealing with very experienced musicians here, cause technically there’s some pretty complex parts to be found in their writing. As there’s only very short spaces in-between the songs, you’ll hardly find the possibility to catch some breath, so you are constantly about to be hacked, dismembered and mutilated until the disc reaches its last two minutes and an acoustical guitar piece finally brings back some silence. In case you’re already bored by the majority of the established American Death Metal acts of the first generation and if you can’t stand the inhuman sounding DEVOURMENT / DISGORGE etc. vocal-style either, EMETH might be your right choice! They are far more intense (partly even a bit monotonous), but deliver their vocals in a very deep and inhuman, but never unnatural manner. A very brutal act indeed, totally worth being checked out! If your favorite mailorder doesn’t offer the CD don’t hesitate to contact the band or their label directly at www.emeth.be, respectively label.brutalbands.net/.