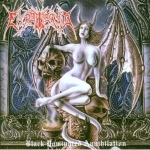 I don’t know why this record gets advertised as the continuation of BEHERIT’s “Messe Des Mortes” as I am not able to find ANY resemblances. Instead this German trio delivers nordic influenced Black Metal at a raging speed which makes it compareable to DARK FUNERAL perhaps. Some riffs have a slightly chaotic character but the overall atmosphere is very akin to their Norwegian fellows… also the drum patterns with their use of breaks and stops follows that certain structure of composition even though I wouldn’t speak of a copy here, no. As I have neither heard their demo nor their split with TRIUMVIRAT XUL I cannot comment whether they sounded different. Anyway, the material is far from being bad although I expected a bit more to be honest. I recommend that you give this album (which is a re-release showing the cover that was intended by the band instead of the cheesy one supplied by Dragon Designs on the first pressing) a listen if you are into fast nordic styled Black Metal with extreme vocals somewhere between throaty croaking and whispering. The nine tracks are performed in a tight way and no keyboards are featured here (apart from some seconds at the beginning of the disk). I am sure this material (recorded 1999, by the way) will appeal to some fans of that genre – but don’t get fooled by its advertising. The LP version is limited to 500 copies. I don’t know whether EMPALIGON are still active but you may try to contact them at the following adresses: R. Ostasch, Am Annaschacht 16, 92237 Sulzbach – Rosenberg, Germany. Email: EMPALIGON@gmx.de