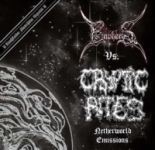 Quite an interesting split CD has reached our hands, EMPHERIS and CRYPTIC RITES…both Polish Black Metal bands, in alliance with the growing label, Psycho Records. Musically speaking, this split CD is an opus of fast furious traditional Black Metal, both bands are into the same line however with differences between each other, but overall, the proposal is consistent in terms of style from both bands. Now let’s get into more detail, EMPHERIS opens the release and right from the very first moment a relentless march of straight to the point music appears, no poses or pretentions, just Black Metal the way it should be…evil fueled of pure hatred and disgust. These guys made two covers. One by DARKTHRONE, which I feel was too simple for them (there are plenty of better songs… but if they liked it, never mind) and ‘Corpsegrinder’ by DEATH. A track to pay attention to is definitely the 2nd one ‘Necromongerdom’ which shows the versatility of these guys introducing some catchy Thrash riffs at the beginning. After listening to EMPHERIS for a while you can hear some similarities with the mighty DESTROYER 666… On the other corner…we find CRYPTIC RITES… a band that has a less polished sound, the production is set up much more for Death Metal, especially when you listen to the vocals, the presence of growls is stronger than in EMPHERIS case. Even when the production is a little bit more "underground" this does not mean their part sounds bad or so…no way, the sound allows to appreciate each instrument alone as a whole, the songs have this feeling of ancient evil form of blackened Death Metal. A remarkable moment with CRYPTIC RITES is the opening of the 8th track ‘Nightmare’… or the cover from SODOM ‘Remember The Fallen’ that contrary to their mates EMPHERIS, allows the band to shine by taking a killer song performed with their own vibe and style. Two killer bands that really caused me an impression mostly because they are able to stick to the traditional frontiers of Metal without falling the tramp of "confusing" it with bad shitty productions that sound like crap because they are so fucking "true"… no… don’t let anybody fool yourself… shitty crappy bands do not necessarily are the only ones appealing to old school approaches… here we have two good examples. www.crypticrites.prv.pl, www.myspace.com/crypticrites, www.wydawnictwopsycho.com