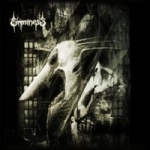 After hunting down exactly which EMPTINESS this certain band was, as there are at least six that I have heard about in recent times (one from Brazil, one from Poland, one from Venezuela, one from Romania, one from Greece, and the one of whom we talk about this moment from Belgium), I have to say it pays to have your act’s name put to rights through legal channels. Especially nowadays, six bands all with the same name? Ludicrous. Anyhow this album is the second in line for this Belgian bunch – the follow up to 2004’s “Guilty To Exist” that I have not heard (however if that isn’t more of a Thrash titled piece I don’t know what could be!) and yet I wonder aloud if I really need to hear that one, as this record here seems as it can stand well on its own, alone. Musically this EMPTINESS offers a heavily laden Doom infected Death Metal that is as melancholic as it is melodious. Think old GOREFEST, ANATHEMA, DISGRACE, and KATATONIA, all the while delivered with an under tone of capable sincerity and a brutally honest heavy-handed approach. That in all honesty if you knew the actual background of this act, and the fact that this band, at one time, were three halves the Black Metal antagonists ENTHRONED! And still to this day consist of a couple of those ex-pandas within their ranks. You would know why I find this footnote of Metal truth so ironically humorous. One point that I will say in the band’s defense is that at least these previous Black Metallers had the gutteral adroitness to surrender ENTHRONED to the headman’s block, and not carry on in turpitude with an obvious and blatant money making change of musical attack to the stunned confusion of their fans, i.e. Poland’s BEHEMOTH, who have not only done this but who would rather try to goad people into believing that they are just as Death Metal as any in this particular genre’s field and in the same breath would trudge on with their Black Metal escapades intermixed as they wish without any believed faulter and in total obstinance. Remember… Only Death is real! Contact: www.emptiness.be or www.myspace.com/emptinessbe or www.agoniarecords.com