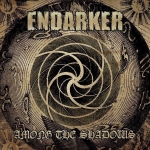 ENDARKER
Among The Shadows
(I Hate Records)
41:49min

ENDARKER was one of the many projects in the early Death Metal underground in Sweden, which also perished in the mass of releases and rising bands and their most famous member Magnus ‘Devo’ Anderson later joined MARDUK to record their debut “Dark Endless” with them. He was joined by a guy called Peter Härje on guitars and vocals and an obscure drummer called Necrowretch. Their first musical steps go back to 1986, when they started playing rough tunes in vein of OBSCURITY, MEFISTO and BATHORY. Historical wise this project, which was totally unknown to me so far, is very interesting, as they have been one of the earlier extreme bands in Sweden and started playing even before MORBID or NIHILIST. Their first musical tunes were recorded in form of three tracks, they have recorded during a rehearsal session back in 1986. These tracks are very rough and a bit noisy, which from today’s view could be considered as an early incantation of Death and what was later to be named as Black Metal. In 1988 they recorded the track ‘Slaughtered’ during another rehearsal session. This track shows already a slight development into a more orderly style and the improvement of the involved musicians. Then five years seem to have passed without any noticeable actions until the band started to become creative again in form of three new tracks again recorded during rehearsal sessions in 1992. These tracks were another huge step forward and show the project and their songwriting had grown into a more serious direction. The style there is an obscure mix of their old influences combined with the classic Death Metal of the early 90s and a pinch of classic Rock’n’Roll in vein of MOTÖRHEAD with distorted vocals but no real grunts. In this phase they seem to have followed the project more seriously as they finally entered Dan Swanö’s Hellspawn Studio, to re-record ‘Darkness’ from their ’92 rehearsal demo and the new tracks ‘Among The Shadows’ and ‘Vivid Imagination’. These three tracks combined with a proper recording quality show this project in a really good shape and are very enjoyable. As mentioned, these tracks are a mixture of classic Death Metal with groovy Rock’n’Roll and even some Horror Punk influences. Sounds weird but works out pretty well and sounds very unique and matured. Unfortunately then the project seems to have disbanded forever. If they would have followed their direction any further and would have written some more material with a similar quality, I think together with the development ENTOMBED and other bands made in 1993/1994 away from Death Metal, ENDARKER could have received some more attention and even a proper small record deal as especially the 1993 recordings sound very good and even from today’s view they are worth to be checked out. Especially for people like me, who like to dig in old rotten graves. Unfortunately it was difficult to find any more information about this obscure project but if my deliberations made anybody curious, please go and check this compilation out which was remastered by Devo Anderson himself at Endarker Studios. More info at: www.facebook.com/endarkerband, www.ihate.se, www.facebook.com/ihaterecords