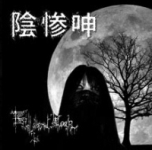 It’s an open secret that Japan hasn’t so much Black Metal bands to offer so it’s logical that not so many emerged from the land of the rising sun. But when you got hold of some releases then you mostly got quality releases from acts like SIGH, FUNERAL RITES, AMDUSCIAS, INFERNAL NECROMANCY, etc. ENDLESS DISMAL MOAN also hails from Japan and is one of these few bands which releases its debut album on US based label Blackmetal.Com Records. The man behind the concept of ENDLESS DISMAL MOAN is Chaos9 aka Takuya and he is handling all instruments and vocals by himself. I would say that this band is not one of your standard hordes within the realm of blackened music as ENDLESS DISMAL MOAN mixes a lot of styles together to a dark, apocalyptic, depressive and horrific cocktail. I have to admit that it’s not easy to listen to this brew. You have typical Black Metal ingredients here like the extreme screaming / nagging vocals, distorted guitars, fast speed and some keyboards on one side but you can also discover some doomy elements as well as ambient / ritualistic soundscapes and influences from the Japanese alternative underground scene on the other one. The weakest point of the album is the production / sound quality. Everything is arranged in a very chaotic / blurred way (but I guess that was the intention). The programmed drums (they sound at least like drum computer) are sometimes too dominant and too clinic (they are mostly played fast and pummelling). The guitars are a little bit too thin for my taste (thus lacking the aggression) and are mixed too much in the background. The music gets its aggression and hate by the vocals and the wild drumming. Due to this not so fascinating sound some good song ideas go a little bit under like in ‘Goddess Of Death’ or ‘Vampire’. The lyrical concept on Zigoku (the traditional concept of Nippon Hell) seems to be interesting, but unfortunately no lyrics are included. The album features ten new songs and six bonus tracks from the demo (where Chaos9 was supported by Lydian6 on guitars on some tracks). To sum it up here: this album is for sure nothing for ordinary listeners who like normal bands which we are all aware of as you have to concern yourself longer with this stuff. This one is just for some dark souls who don’t mind some experimental, a kind of avangartistic sounds combined with depressive neo Black Metal to a unique mix to dive into the deepest abyss… and I guess that aren’t so much out there. Feel free to get in contact with ENDLESS DISMAL MOAN at dismal@x.nifty.jp or visit the webiste: www2.odn.ne.jp/chaos9/, label contact: www.blackmetal.com.