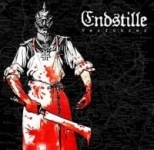 The German underground has its own rules and a band like ENDSTILLE has for sure “earned” their special position within the scene. If they really want to be part of the scene by following the true rules depends on the perspective but to mark the band as a simple MARDUK clone (musically & image wise) would be more than unfair. Especially the new Metal generation seems to love this band – just visit a Black Metal concert (in northern Germany) and the amount of kids wearing ENDSTILLE shirts can only be exceeded by the endless Wacken maniacs – so in short – this band is hot. Unfortunately I’m a little bit older than 15 years and the sixth album since the founding of the band in 2000 is a good release but “Verführer” cannot completely justify the mass-hysteria created by the mass-media. The band from Kiel hasn’t changed their course – pure aggression and devastation are still at the absolute limit and nobody will ever expect anything else than high speed Black Metal from this war-fetishs. So the direction is clear, the weapons are ready and songs like ‘Dead’ are showing the real potential of the band – the big question is if anybody can find so much more ENDSTILLE on “Verführer” than on their former releases. Nevertheless a good release which shows that the true Black Metal style will never die but the big question will be which battle they want to start if all wars of the last 100 years had been fought? www.regainrecords.com, www.endstille.com