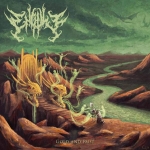 The rather new US American band ENGULF is the brainchild of a guy called Hal Microutsicos from New Jersey. He is not just the founder and songwriter, but also the only member and thus responsible for all instruments and vocals. So, we have a classic one-man-band here. This usually is a sign to be alarmed, since it implied keyboard dominated Black Metal from tree huggers who still live in their child’s room for a long time. Thankfully, times have changed and Hal Microutsicos is not that special type of person. ENGULF is also not a Black Metal band and you neither hear nor miss any keyboards on the second EP “Gold And Rust”. Instead, Mr. Microutsicos is out to prove that you don’t need a full band to play technically ambitious Death Metal. Yes, this is what you get here, music that isn’t one bit catchy, but demanding and sophisticated. Somehow HATE ETERNAL came to mind listening to the riff cascades of songs like ‘Maul’ or ‘Misshapen Abomination’, but also NILE and early to mid MORBID ANGEL might give you an idea of the sound of ENGULF. If you dig these bands, the two songs mentioned and the third one, ‘Sovereign To The Seven Underworlds’ will please you quite a lot. And if you like what you hear on “Gold And Rust”, check ENGULF’s first EP “Subsumed Atrocities” from last year as well, since it takes the same line. And as an extra information: “Gold And Rust” is part of a series of EPs that will lead to a full length album from ENGULF sooner or later. In the meantime, check www.facebook.com/engulfdm or www.everlastingspew.com for more.