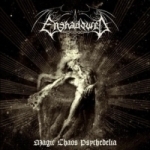 ENSHADOWED from Athens are one of the legions of Black Metal bands from Greece who are less known. Maybe it’s because it took them nearly ten years to release a third full album after "Messengers Of The Darkest Dawn" (2002) and "Intensity"(2003). In the meantime they were far from passive, putting out five split releases with MANTAK, THORNSPAWN and other bands. But maybe they are quite unknown because they are far too ordinary to stand out of the mass of Black Metal bands. Listening to "Magic Chaos Psychedelia", I always thought of MARDUK and older EMPEROR stuff, maybe with some discreet influences from older Death Metal bands. So, we have nothing new here, which should not automatically mean that it is boring stuff. The songs are varying from blasting parts to midtempo, spiced with fragments of melodies and vocals which are genre-typical. Furthermore, the sound is pretty good, the drums are punching hard, the guitar sound is clear, the mix is well balanced. The problem is, that it all sounds too trivial. From the opener ‘Stary Throne Of It’ it takes until the fifth song until something spectacular happens. This track, ‘Surrealistic Shade Of Color Black’, has some nice HELLHAMMER-styled guitar pitches in the end. ‘Inner Psy-Trip’ also shines out with its down-tempo undertone and the piano parts at the end. But the ultimate highlight of the album is hidden at the end: the title track ‘Magic Chaos Psychedelia’. Doom Metal riffing meets Black Metal guitars and leads over to female vocals in a ethic Arabian style mixed with oriental guitars and a gloomy atmosphere. Great epic stuff, a total stand out here! Too sad that this song is the only one in this style, one or two more killers like this would have made "Magic Chaos Psychedelia" a definite advice to all you Black Metal fanatics. But nevertheless, I’ve heard many poorer records in my life. So go and check www.enshadowed.co.nr, www.facebook.com/enshadowedofficial or the label site www.pulverised.net