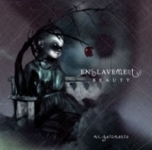 I have no idea whether good ol’ Metalion was responsible for signing ENSLAVEMENT OF BEAUTY or not. But if he was, he probably had a couple o’ drinks too much at the time. This is not necessarily the type of music he tends to worship, so maybe the band simply got signed for financial / commercial reasons in order to keep Head Not Found alive?! Who knows… Fact is that these Norwegians play a very cheesy type of “Black” Metal with tons of melodic elements and pompy / symphonic keyboards. Kinda like Italy’s shooting stars Rhapsody, but with an aggressive vocalist or something. And that vocal delivery is actually the only connection to the Black Metal genre, cause musically as well as lyrically ENSLAVEMENT OF BEAUTY have nothing in common with all the dark, blasphemous and eerie dudes around the world. According to the infosheet, there’s lyrical influences from the “poetic beauty of Shakespeare and De Sade”… Oh well. “Megalomania” is already the band’s second full length (their debut “Traces O’ Red” came out in 1999) and features BORKNAGAR’s Asgeir Mickelson on drums (just in case you like some name dropping). Technically there’s nothing to complain about, but the musical combination will not necessarily appeal to Power Metal or Black Metal fans, unless you’re also into bands like IN FLAMES and the likes. Everyone else either won’t get into the vocals or will most certainly have a tough time with the overall happiness of the material.