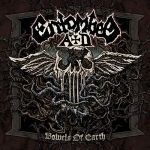 Rock’n’Roll rebels won’t tell you no lies, will they? That old adage might go for ENTOMBED A.D.’s new album as well. Mr. Petrov and friends have managed to keep thrashing through thick and thin with three pretty similar full-length albums, the first being 2014’s "Back To The Front" followed by 2016’s "Dead Dawn". "Bowels Of Earth" sits next to the aforementioned LPs on all levels. Basically, with ENTOMBED A.D. you know what you pay for: catchy HM-2 riffs over fast D-Beats, excellent solos (now more Alex Skolnick-ish than ever), a fistful of mid-tempos plus world famous, major-league-of-beer vocals on top. ‘Torment Remains’ is a good opener, but ‘Hell Is My Home’ manages to tame all flames right away with a quite shallow verse riff. Generally speaking, each and every song on "Bowels Of Earth" seems to be conceived to sound professional on any big European Metal festival PA for in-between warm ups. Disclaimer: modern production doesn’t always imply music is crap, but a pumped-up, heavily muscled mastering will surely end up burying an album’s implicit dynamic quality and eventually ruin the natural oscillations in human playing and in songwriting itself. There are no stand-out songs to be heard on this album really. It seems like they just sat down and willingly applied a limiter to output volumes and quality altogether. I could say I didn’t like the title track’s awful, pre-solo melodic progression and stuff like that, but it would just be useless at this point. "Bowels Of Earth" is an OK record, made by some more (or less) legendary musicians who revolutioned the shape of extreme music many years ago. Its befitting cover art, the party-friendly HANK WILLIAMS and MOTÖRHEAD covers and its worldwide availability will appeal to buyers in need of a quick, superficial fix of Swedish Death Metal (I couldn’t disagree more here – to me this is the best album with the name ENTOMBED on it since the legendary "Clandestine" album from 1991! – Frank). I assume all other ignorant, yet refined extreme music maniac will probably skip ENTOMBED A.D.’s latest invitation and simply put on whichever DEATH BREATH record in sight. Follow the smell of booze at www.facebook.com/entombedad and www.centurymedia.com.