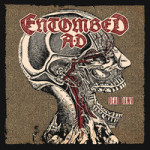 I think that the story of the split of the Death Metal legend and forefathers ENTOMBED is widely known, as much as the fact that the last line-up of the band without Alex Hellid tries to continue the legacy of the band under the moniker ENTOMBED A.D.. The first album of that line-up, “Back To The Front”, sadly didn’t keep any promise, as it was just an anaemic attempt to revive past glories. Now it is up to the new album “Dead Dawn” to restore the reputation of ENTOMBED. Or ENTOMBED A.D., if you want. And “Dead Dawn” at least partly succeeds. Just like the predecessor, the album steers the course ENTOMBED walked in their late days, the time around the “Serpent Saints” album. But the new songs put a little more stress on the Death’n’Roll ideas the band invented, like in the fine groover ‘Down To Mars To Ride’. And with ‘As The World Fell’, we have one of the slowest and doomiest songs ever recorded under the ENTOMBED moniker, another song that definitely is to the band’s credit. The same goes for the fiercely rocking ‘Total Death’ and partly for the spooky and as well doomy ‘Hubris Fall’. On the other hand we have a few songs of no further impact, like the title track or ‘The Winner Has Lost’. In those moments it is hard to deny that this band is still a shadow of their former self. But there is hope for better days to come, either thanks to the three and a half good songs or a faint wish for an end of discord. If you want to find out more, visit www.facebook.com/entombedad for the band or www.centurymedia.com for the label.