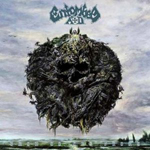 ENTOMBED A.D.
Back To The Front
(Century Media Records)
51:15min