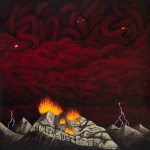 EPITAPHE is a new Doom / Death act coming from France. This is their debut demo entitled just as “Demo MMXVII” and it was released earlier this year by Mexico’s Chaos Records. Recorded in the “French Alpes”, what we have here is three long tracks of some kind of raw stuff. ‘The Downard Stream’, the first track here, is the shortest one (10 minutes!). The first riffs and drumming is pure Death Metal (I mean blast beat), but then this composition slows down to some mid-tempo patterns. ‘Embers’, the second track, kicks off with a simple but effective drum solo to give way to some sheer brutality. The last track, ‘Smouldering Darkness’, is the longest one (17 minutes) and has the most varied passages: slow and fast parts, arpeggios, bass and guitars solos and keys. The structure of the compositions is similar to legendary acts like DISEMBOWELMENT or PARAMAECIUM: long songs and well developed. The production is not really good, but keep in mind that this is just a demo. A good first effort, but I really miss some darker atmosphere and better production (maybe I’m wrong but sometimes it sounds like this was recorded using just one guitar track). You can get a copy at www.chaos-records.com. More band info at www.facebook.com/epitaphemetal