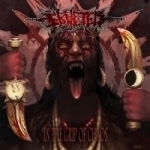 ERUPTED
In The Grip Of Chaos
(Abyss Records)
40:54min

With a cover artwork like what’s presented on this Swedish Death commandos ERUPTED’ debut (just see the pic yourself), you can only expect something wild, savagery-like and bloody fuckin’ brutal, right? Welcome to the world of sheer savageness and brutality of these 5 slaughterhouse messiahs ERUPTED then that stated out under the CARNIVORE moniker in 2010, self-releasing just one 3-track EP titled "Faces Of Death" a year later. When it comes to these young Swedish fellows’ debut record, "In The Grip Of Chaos" then, well, unfortunately one word describes it pretty well in my opinion: monotonous. Sorry for this – probably a bit harsh commenting on this release, but "In The Grip Of Chaos" as a whole, simply didn’t turn me on at any point while I was giving it some of my precious time listening to it, just to make my sincere opinion out of it. However, I am not saying either this very record in question was absolutely bad or horrifying because almost every record has its a few rare precious moments – just like this one, I think. Even if ERUPTED keep its home Växjö, Sweden, they really don’t sound like an old school Swedish Death Metal band that much after all. To me, their sound is definitely a tad closer to bands like the demo era of DEMIGOD (especially vocally), CIANIDE and early AVULSED, than any of their Swedish comrades in crime really. Chugging and slowly roaming riffs, raw and crawling bass patters and sludg-ish drum work accompanied by guttural, guts-messing barks of Mr. Sundberg, they all create a heavy backbone on "In The Grip Of Chaos" but unfortunately that particular grip doesn’t hold too long, I’m afraid. There’s some variation in between their songs – from some slower passages to faster sections, but I still wasn’t not quite that happy with what I was hearing. They obviously lack of some vital catchiness and more memorable breakdowns for their songs, so hopefully that’s about to chance when they will churn some new material out, and start to put tracks down for their follow-up record in the future. That, of course, remains to be seen… Band contact: www.facebook.com/eruptedofficial, label website: www.officialabyssrecords.com