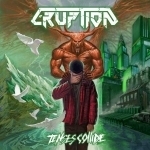 In many cases, today’s attempts to revive the golden Thrash days run into a wall of criticism. Too often it’s a soulless mix of clichés, too forced or just too much of this and too less of that… ERUPTION is a band from Slovenia what for some people maybe fuel to burn down a band trying to dig up the Bay Area sound. "Tenses Colide" is their second album after "Lifeless Paradise" which was released on On-Parole Productions in 2009. On their debut they were pretty heavy and straight forward with a good atmosphere and pretty good riffing by Tim Tajić and Klemen Erjavec. A real cool record that anyone into the classic (East) American AND German sound should check out. "Tenses Colide" is unfortunately far less intense. ‘Celestial God’ and ‘Selfcaged’ are enjoyable, but as this albums proceeds it loses too much aggression and seem to focus on a technical progression. Vocalist Kiemen Kalin is trying to do his best and same goes for the rest of the band, but in the end there’s something missing on this album to fully kick ass. Too bad really because the talent is there as was proven in the past. For more info, go to www.facebook.com/eruptionmetal, www.xtreemmusic.com