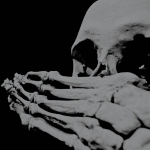 First off, let’s just get this out of the way. The band’s name is ESSENZ? Really? This is the best they could come up with? "We’re blackened Doom. Let’s put the fear in people’s hearts. I know, we’ll call ourselves ESSENZ!!!" Sounds more like a Beyoncé side project. After three albums, it’s probably too late to rethink things. All kidding aside, don’t let the band name fool you. This band is different, yet still maintains a Metal feel to it that we can all appreciate. Hailing from Berlin, this three-piece consists of members from DROWNED and EARLY DEATH. With their first release since 2012’s "Mundus Numen", ESSENZ present us with "Manes Impetus", a seven-track, 57 minute opus that moves all over the place but mostly feeds our hunger for Metal animosity. The first track ‘Peeled & Released’ is slow-building with its pounding intro, then pure Black Metal atmosphere with steady drumming, mysterious guitars and raspy vocals. The trance-inducing repetitive first third of the song then breaks into more of a rock-out before staggering into a doom-laden monstrosity of a track. ‘Unfolding Death’ is a throwback to the Black Metal sound we all know and love. Each track on the album never really sits still before making sharp turns, but without changing the entire feel of the song. ‘Amortal Abstract’ thunders along in a walking-through-quicksand pace, melding into a monster of a song. Their ability to sound like a shuddering, lumbering monolithic beast is impressive. ‘Randlos Gebein’ picks up the pace with another black delivery. The drums are mixed just right to give the track an epic feel while the vocals hold down the fort. The bass thumps, shimmers and maintains a swaying rhythm that glues the remaining parts of the song together. ‘Apparitional Spheres’ carries on the Black Metal feel, making this a very consistent album, so far but without boring us to death. But then there’s ‘Sermon To The Ghosts’ coming in to really fuck things up. It’s a snail-paced, ambient track of no tune, mumbling voices in the background peeking their way in and out, creaking noises and almost 10 minutes of head-scratching on my part. Why? Why?? Why???!!! Why must bands do this? At least include tracks like this at the end of an album so it doesn’t throw off the rhythm. Because once the final track ‘Ecstatic Sleep’ gets going after 2 1/2 minutes, we’re back to the Metal goodness we were enjoying the first five songs. A simpler track than the others, but still a nice ending to the album. To wrap things up… 1) Terrible band name 2) Track 6 should be the final track or completely left off 3) The other six tracks are damn good. Give the guys a listen. Skip over track 6. Enjoy their Metal glory. For more information, check out www.facebook.com/znesseessenz, www.amor-fati-productions.de