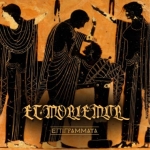 This is some of the best Doom / Death Metal I have heard in quite a long time. Coming from the Czech Republic, this is actually ET MORIEMUR’s third album. Formed back in 2008, the band names itself in Latin and means “And We Will Die” and for this album they decided to use their lyrics not only in Greek but also in Latin. This album is completely dedicated to death, in a way it resembles a requiem, complete with ‘Introitus’, ‘Requiem Aeternam’ and ‘Dies Irae’, which are also song titles. The sound of the band is more likely to be related to the Dutch Doom / Death bands from the 90s by the name of old THE GATHERING, CASTLE or BEYOND BELIEF to name some, but also to more traditional Doom bands like CANDLEMASS or BLACK SABBATH. They also use many vocal styles, from the deep low grunts, to more high pitched growls to almost Monk-like chants and even a full choir. And also there is a wide variety of instruments used to encompass the sounds of despair and hopelessness. At times, the only thing I feel is that a bit more of “energy” to call it somehow, would be needed to keep this more interesting, yet it is Doom Metal and we shall remember that it is about perdition and not hope. A really great production makes this misery to be complete. Doomed Death Metal addicts, this is what you were looking for. www.facebook.com/etmoriemur, https://tometal.com