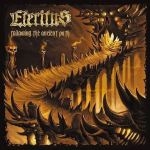 I’ve recently written about the debut full-length of THE DEAD GOATS, "All Of Them Witches", and I’m now discovering a new Polish band that, like their fellow coutrymen, are achieving a good reputation in the Death Metal community. ETERITUS, coming from the city of Toruń are a new project, in fact they started in 2013 and they recorded only the EP "Tales Of Death" before now. Nonetheless, the current line-up is expert enough, being active in some bands like NORTH, MORITURUS or VEXATUS. "Following The Ancient Path" is the title of their debut album, produced by the Polish label Godz Ov War Productions. It can be easily classified in the old school Death Metal category, definitely a style more and more played lately; luckily in this case you have someone that can overtake the mass of sloppy bands that throng the underground. After an ‘Intro’ of overlapping guitar licks, the first track ‘Biocentric’ stops the delay, based on a variation of mid paced and fast rhythms. A clean but super heavy guitar sound immediately stands out, without the risk to be blended in the total mix. The producer Michał Barski surely deserves a positive judgement for the sound he shaped in this album, that can be competitive with other applauder releases. The album goes on with good enjoyment til the end, with a great use of melody played in the right context. Influences from the Swedish and English schools are undeniable: BOLT THROWER, GRAVE, BENEDICTION, UNLEASHED and CENTINEX are in the DNA of ETERITUS for sure! The songwriting is essential, flowing and mature; there is a nearly absence of abundance, the brief duration of these eight songs (‘Hellish Imagery’ is the longest, just 4:30min) implicates an almost easy listening and a fruition that gives an immediate impact. The graphic feature doesn’t disappoint either, so the cover artwork of Bartłomiej Kurzok evokes the obscurity and the horror that ETERITUS convey with their instruments and by the grunting voice of the singer Liam Tailor. It’s a very good debut, it’s not upsetting as it regards the originality and the personality, but I’m pretty sure that many Death Metal maniacs will "follow the ancient path" and they will enjoy this album. All the info you need at: www.facebook.com/pages/eteritus/676297192392076, http://eteritus.bandcamp.com, www.godzovwar.com