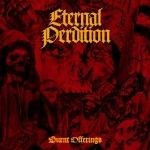 ETERNAL PERDITION is a Swedish Death Metal band from Norrköping, Sweden. They formed originally in 1998 under the moniker DISGUSTOR, releasing a compilation and a demo. “Burnt Offerings” is their first release and with a run time of just under 20 minutes ETERNAL PERDITION makes a phenomenal impression. This is a direct descendant of the early MORBID ANGEL sound and the band gets on to the business from the get go. ‘Under The Horns’ is a brilliant opener, the vocals accentuate the evilness in the sound, there are no gimmicks here, the band focuses on an extremity in their delivery which comes across brilliantly. This release neither has an aorta of modern sound nor does it go above and beyond what is traditionally Death Metal. Anyone with a fair exposure to the late 80s and early 90s Death Metal scene will immediately gravitate to the sound on “Burnt Offerings”. ‘At The Crossroads’ is just a muddled expression of confusion coupled with aggression, ETERNAL PERDITION have simply stuck to the age old formula when it comes to Death Metal and I have to say, even though their sound and approach doesn’t necessarily explore new territories, their writing and delivery check all boxes. The riffs are carefully arranged next to one another, the drumming hits the right notes and the vocals add in the final nail into the coffin. Embracing a primitive, bestial approach, ETERNAL PERDITION is sure to make a mark in this year’s release cycle. If you’re a fan of old school Death Metal, check out ETERNAL PERDITION, recommended! This will be absolutely fun to listen to in a live setting. For more information, please visit: www.facebook.com/bestial-invasion-records-247631521920716