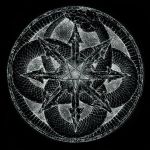 When Jon Nödtveidt returned with DISSECTION, some were surprised about the new sound and instead of checking unbiased, everybody was unhappy that the sound was no longer as before. The same could go for the new output under the moniker EUCHARIST which is the single creation of Markus Johnsson, after Daniel Erlandsson left the building once again. So everybody expecting their sound of the 90s will be at least surprised. One can discuss if a name change or a neutral name would have been more expedient but Markus and his new companion Simon Schilling chose to breathe fresh air into the old name. The result anno 2022 is a blackend version of EUCHARIST. Once you have deleted the old memories of “A Velvet Creation”, “I Am The Void” opens up a new chapter. Already the opener ‘Shadows’ shows what to expect. Melodic Black Metal with all kinds of ingredients of bands like DISSECTION, MARDUK and UNANIMATED. The songwriting shows that no newcomers are working here. The drumming is that precise that I first thought a drum machine was programmed here. The twelve provided songs are definitely good, with a bunch of good riffs and ideas and fans of NECROPHOBIC, NAGLFAR and DISSECTION can consume this one blind. What I miss here (yes I am old) is the old charme, EUCHARIST has spread in the early 90s. Even their second album “Mirrorworlds” was pretty unique and had this old and maybe even chaotic charme of the 90s. All twelve songs offer solid Black Metal and the title track ‘I Am The Void’ with its overlength has a lot to offer but even though the album is solid, I miss some own identity and as mentioned some trademarks which made EUCHARIST so outstanding in the mid 90s. The album still is in regular rotation in my car and grows from spin to spin (the same feeling I had with “Reinkaos” back then). I hope this is a new start for the band and maybe with some more real members again, this blackened version of EUCHARIST can grow. I really hope to hear some more stuff in future. For more info, as always check one of the following sources: www.facebook.com/eucharistsweden, www.facebook.com/helterskelterproductions