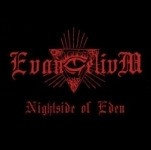 EVANGELIVM is a two-man band from Russia I’ve never ever heard about and thus marks Hammer Of Hate’s first signing outside Finland. As the band name suggests, orthodox devil worshipping in the WATAIN, FUNERAL MIST, ONDSKAPT tradition is the deal here yet in terms of quality and impact on the musical side of things, EVANGELIVM still have some way to go on the left hand path. Whereas riffing and passionate, snarling vocal delivery are in place, weak (programmed) drumming and too many copycat melodies and song progressions keep my adoration for this debut effort at a rather low level. Sad, since I’m a huge supporter of this style and was hoping for such a positive surprise as e.g. Polish KRIEGSMACHINE’s first album – as a side note: isn’t it awkward that a band with such a boasting name never actually did a song about war?!? But back to the black aura of EVANGELIVM: the basics are there, the spirit and conviction is present yet transferring it into spine-chilling Satanic art that at least is on par with its obvious inspirations still will need some serious work. Please take heed of my gospel, dear EVANGELIVM: get a proper drummer, develop a sound with increased individuality and attempt to put so much heart, blood and extremity into your music as e.g. the undisputed genre leaders WATAIN did to reach the status they uphold proud and deservedly nowadays. The four lengthy tracks and two instrumental pieces EVANGELIVM revealed on their debut are solid material, but – honestly – only a total “religious Black Metal” junkie actually MUST get this. Fortunately, the production – this was mixed and mastered at Endarker Studios, Sweden – leaves no room for complaints at all. To not ruin this completely, give a spin to VALOTON, which are also on Hammer Of Hate and just released a damn impressive and inventive album that should appeal to fans of the aforementioned bands… just as a little tip. www.hammer-of-hate.com