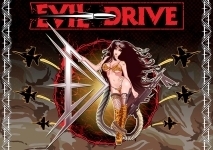 Finnish female fronted act EVIL DRIVE (also featuring 2 members from DOMINATION BLACK) has just been around for a short time; since the beginning of 2013. It’s pretty hard to put the finger on any THAT specific Metal genre and say, this is what EVIL DRIVE is all about musically. To me, they could be put somewhere in between Thrash and modern melodic Metal musically, sung with Viktoria’s mostly death grunts but then again some of her talent for clean vocals, is also used on this 4-track promotional EP. Technical as well as executing wise, EVIL DRIVE seem to be ready even for a record deal. I would not wonder much at all if some label got interested in them and snapped the band already, purely for their musical achievements on this EP, and not due to some certain promo shots taken from them (just blame on their camera man for that, ha ha!). However, a couple of sincere observations about their stuff: Firstly, Victoria should concentrate on doing and developing her death growls only, just no matter how good she may be at doing clean singing style. Her death grunts that do remind me of Angel Gossow’s (ARCH ENEMY) surprisingly much actually, and simply sound way more convincing and fit better into EVIL DRIVE’s melodic Metal songs, with a fair Thrash twist. Just a friendly advice, and that’s about it really. Secondly, they could sharpen just a little bit the way how they bring their songs on the table. In some parts they should keep in mind that sometimes less is more. Otherwise there’s a pretty good metallic drive incorporated into EVIL DRIVE’s songs, surely serving a respectable amount of people in the Metal community. The last song on this self-titled EP especially, ‘Screaming Soul’, contains some of those few important ingredients to become a true hit song at EVIL DRIVE’s forthcoming gigs, the opening song ‘Bullet’ crossing the last chalk like right after the last song. Interesting, to say the least, new act this EVIL DRIVE certainly is. Check more about them out: www.evildrive.net