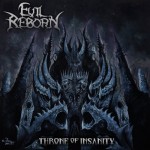 EVIL REBORN is a band from Venezuela that was formed in 2012 and only released an EP called ”Bendita Malevolencia” three years ago, prior to this. It featured three tracks ’Bendita Malevolencia’, ’Adicción Visceral’ (which are also featured on this album) and the HYPOCRISY cover ’Pleasure Of Molestation’. Compared to this EP, on ”Throne Of Insanity” the band is significant tighter and better. In style, the band didn’t change much. On ”Throne Of Insanity” you’ll hear elements of ABORTED, SEVERE TORTURE, BLOOD RED THRONE, JUNGLE ROT and CANNIBAL CORPSE, just to name a few, but the form of EVIL REBORN doesn’t reach the tempo and intensity of these aformentioned bands. Still, their Death / Thrash knows how to convince with the technical and straight forward drumming by José Maneiro. Guitarists Jorge Median and Alfredo Herrera deliver some typical brutal riffs in the vein of MALEVOLENT CREATION a.o., while combining them with more melodic (Gothenburg style) counterparts. At least as strong are the solos. For example ’Possessed Angels’ suddenly get way more class because of an excellent on in the breakdown. Also bass player Jesús Maneiro does a fine job. From almost every form of Metal there’s something to be found, so it serves many camps. The nine tracks sound much alike, but while it’s a solid release, this is not necessarily a negative point. But, while the variation is low, there are no real highlights. If you’re charmed by the bands mentioned before, give ”Throne Of Insanity” a listen, because it’s not bad at all. For more info check out: http://evilreborn.bandcamp.com, www.facebook.com/evilreborndm, www.satanath.com