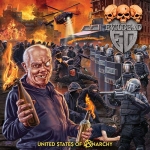 If you are a true old school Thrash Metal maniac you should know those guys. EVILDEAD was formed back in 1986 by ABATTOIR and AGENT STEEL members as a side-project. Released back in 1989, their debut album “Annihilation Of Civilization” became an instant classic while “The Underworld”, their second album, was some kind of good semi-technical Thrash record but not as good as their first output, even with two stellar guests as Gene Hoglan (DARK ANGEL, DEATH, TESTAMENT, etc.) and David Wayne (METAL CHURCH, REVEREND, etc.) on some tracks. Then came a live album and shortly after EVILDEAD disappeared from the map. Now they are back with “United $tate$ Of Anarchy”, their first studio album in almost 30 years and I’m feeling a bit disappointed. ‘The Descending’ is the first track here and what we can found is some mediocre and uninspired Thrash Metal composition, miles away from the semi-complex fast stuff that you can hear in their early works. Then comes ‘Word Of God’ and ‘Napoleon Complex’. Well, I’m still waiting for something memorable. From the fourth track forward it’s hard to identify the differences between each song. To be fair, this is far from terrible. I was expecting a slice of Thrash Metal in the old good way and what I’ve found is just standard stuff. Too bad EVILDEAD choose the safe way to do it because the results are not really satisfying, in my humble opinion. Sorry guys but if you want to be a relevant act in the current days you should offer something different from what the rest is doing and this is not the case. The good thing is that EVILDEAD keeps the style intact that gives them a spot in the classic US Thrash scene. Hearing your older stuff I’m pretty sure you can deliver a better product in the near future. Follow this classic act at www.facebook.com/evildead.official. To get a copy just visit www.spv.de