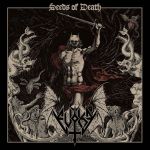 EVOKED? EVOKEN? No, this time it is EVOKE from Norway terrorizing the audience. Of course terrorizing in a way some kind of music was meant to be. Fast played guitars, hard hitting drums and aggressive vocals – the unholy trinity of Thrash Metal. In 2016 the trio released one track in digital format (‘Souls Of The Night’) and the same year a four song demo entitled “Rehellshall Demo”, which was, as the title suggest, a rehearsal recording. Now four years later all tracks found their way on the debut, only the SEPULTURA cover track ‘Septic Schizo’ is missing. Anyone now looking at the playing time and complaining about that three of seven songs already are old songs – please stop complaining. Nowadays so many bands and labels are releasing premature material and senseless re-releases, the wheel keeps turning faster and faster. And it is a total plausible course of action to write and rehearse songs, to put them on a demo and then continue to write new songs but although to improve the demo songs. “Seeds Of Death” clearly benefits from this kind of procedure, since the seven tracks are exquisite Thrash Metal. Powerful and enthusiastic with no remorse the playing time passes by like nothing. And, this speaks for well-balanced songwriting, it never gets boring. Although I must admit that some kind of recognition value is missing, but I guess EVOKE never laid emphasis on that aspect. One album that always came to my mind when trying to find a comparison was “Under The Blade” by DEFLESHED, due to the immense power and high-paced frenzy. Additional notable advantages are the nearly perfect sound and the expressive artwork. On the band’s Bandcamp site information is given, that it was recorded and mixed at Toproom Studio (BORKNAGAR, ENSLAVED, MAYHEM, etc) by Hellforge Studio’s Marco Brinkmann (VULTURE, SCALPTURE, etc) with mastering duties by Patrick W. Engel at Temple Of Disharmony (BLACK VIPER, DEGIAL, GRAVE MIASMA, etc). Cover artwork by Chilean illustrator Hex Graphics and layout by Heresie Design (TEITANBLOOD, GRAVE MIASMA, ENSNARED, etc). For more information all Thrash Metal maniacs are advised to visit www.facebook.com/evokeoslo or www.facebook.com/pulverisedrecords