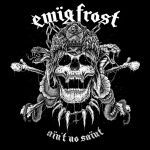 “Aïn’t No Saïnt” is the new album of Austrian band EWÏG FROST. The logo to me seems like a fusion between MOTÖRHEAD and CORONER and also the amalgam of sounds that they mix in their songs ranges from extreme or fast Metal to Rock. This is the fourth album of their career that began in 2003. The album starts in a vibrant way with ‘Into The Night’, a fast rocking theme of MOTÖRHEAD riffs that explodes in your face. ‘In Da Not’ is another theme of high pulsations and short duration, but in this case with a more distorted riff, it sounds darker. Quite strangely, the next track ‘Satan II’ is a typical hard and heavy theme where drums, bass and guitar come together to take on you, and also for the first time on the record you get some melodies. ‘New Cold War’ is another cut of clear MOTÖRHEAD influence and the chorus might be one of the most memorable ones on the whole record. The versatility of this Austrian group is one of their highest points. The instrumental ‘1918’ is a slow, dark and distorted Blues supported by a wind section. It is not what one would expect from a band like this. They continue with ‘De Gier (Is A Luada)’ which applied a Black Metal varnish to its sound, combined with more rocker echoes. However, they return to their path with the dirty rocking ‘Bad Beat Boogie’ which also features piano arrangements. The song could have been written by Mr. Kilmister himself. ‘Desert Sunset’ turns out to be another instrumental, but this time faster, more in the group’s style and very short again. And then we have ‘Mary Jane’, which features sharp riffs and marks the end of this record. Altogether, a very varied record by a band without complexes, where I would say that the Rock factor predominates above the rest. The album doesn’t past half an hour, but the gentlemen from the Alpine state delivered their Black’n’Roll with a Punk punch. The album name says that loud and it is no coincidence that the cover artwork (and the spelling EWÏG FROST) should also “easily” remind of MOTÖRHEAD. “Aïn’t No Saïnt” will be released via Discos Macarras and it has everything to crank your ears and speakers. More EWÏG FROST information you will find at www.facebook.com/ewigfrost, label contact: www.facebook.com/discosmacarras