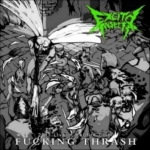 First off, this 7-track live album from Chinese Thrashers EXCITED INSECTS would do much more justice to me if this wasn’t the band’s first release I got to hear from them. Musically there’s a heavy connection present to early DARK ANGEL’s and early METALLICA’s stuff though, with some Punk ideas, so EXCITED INSECTS pretty much want to thrash their hearts out the best they possibly can on this live disc, recorded at Hellfire Club in 2011 already. Production wise, this is even better than I originally expected it to be: I mean, keeping in mind this comes from a very unknown Chinese underground Thrash Metal band, released by an at least as unknown and small Chinese label. The band’s own stuff sounds somewhat alright for my ears but this one cover song done for ‘No Remorse’ by ‘that one band’, just manages to turn the red alarm on for me only. Extra points of my deepest sympathies go out for the EXCITED INSECTS camp for the hilariously titled song names, however, as ‘Dynamo Night Also Known As Harley Kid Night’, ‘Thrash Gulf War’ and ‘Diamond Dust’. Lack of English language or not, but some funny sounding they indeed are. EXCITED INSECTS: site.douban.com/insects, label: www.underfm.com/dyingart/english/discography/trade.htm