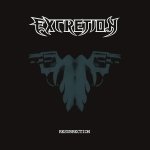 EXCRETION from Salem in Sweden was another really talented outfit back in the 90s that never got the attention they deserved. Founded in 1990 under the moniker ATROCIOUS, the band played classic Swedish Death Metal in the vein of DESULTORY or ENTOMBED. In 1992 the band changed their name to EXCRETION and released their first fine demo entitled “Behold The Light” which was limited to 300 copies and offered three really good songs in form of ‘Behold The Light’, ‘Desolating Earth’ and ‘Sick Defiance’ plus the common for the time intro. The three tracks were raw but already showed the potential of the band as their music and sound was very close to DESULTORY and their first demos and the “Forever Gone” EP, with similar melodies, sound and fine songwriting abilities. In October 1992 the band went to Tomas Skogsberg into his famous Sunlight Studio to record their brilliant second demo “The Dream Of Blood”. This time, nearly all was perfect. They perfected their style and their songwriting abilities and already the intro showed their fine sense for good melodies. The four recorded tracks plus intro and outro were some of the finest tunes the Swedish scene had to offer back then. Tracks like ‘Mortal Life’ and ‘Pain’ easily would have fitted onto the brilliant DESULTORY debut “Into Eternity”. With ‘Tears’ the band really offered a brilliant melodic Death Metal hymn with an outstanding remarkable melody line. These tracks normally should have brought them a record deal, but the mass of releases forced EXCRETION to stay in the underground. The second demo sold 500 copies. The upcoming Gothenburg style and especially AT THE GATES had a huge impact on their future direction and EXCRETION started to incorporate these influences into their sound but also classic Thrash Metal like TESTAMENT. This made them writing four new tracks and they finally returned to Sunlight Studio back in April 1993 to record those four tracks for their upcoming third demo “Suicide Silence”, which has sold about 900 copies. As mentioned the new direction was a mix of classic Swedish Death Metal mixed with some Thrash Metal and the so-called Gothenburg style, but far more aggressive as for example IN FLAMES or DARK TRANQUILLITY with really desperate Thrash orientated vocals and some of the harshest screams the scene offered back in the days in Sweden. This demo finally found some attention by the members of IN FLAMES, who introduced the demo to Wez and Per of Wrong Again Records. EXCRETION fitted perfect into the roster of Wrong Again so the band went to Berno Studios in February 1995 to start the recordings of their debut “Voice Of Harmony”, which finally was released in early summer 1995 as the seventh release in the catalog of Wrong Again Records. They re-recorded three of the four tracks from “Suicide Silence” and another six tracks, which turned out pretty aggressive but still melodic. Also their lyrical topics were again inner struggles and depression. Even though the band was not completely satisfied with the production, I still think Berno Studio did quite a good job on that album. Sadly the band disbanded in 1996 without releasing any more material after this. I still think, that EXCRETION was one of the more talented bands in the haze circle of the so called Gothenburg style and they definitely have deserved some more attention. For me, they were part of my youth and accompanied me over the years with at least three or four spins per year. GS Productions from Russia were aware of their quality and luckily present all their demos in remastered format plus their debut as a 2 CD set in digipak format limited to 100 hand-numbered copies. Also I can promise, there is no single weak track on this compilation, so really value for money. More Info about EXCRETION can be found at www.facebook.com/excretion-163683117099520 or to order the nice CD set, please check: www.gsp-music.com