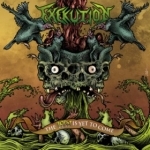 EXEKUTION
The Worst Is Yet To Come
(self-financed)
38:46min

EXEKUTION are a Thrash band from Catalonia, Spain, which formed about a decade ago, and this is their second full-length album. They play Thrash Metal, simple as that, as if they were back in the eighties. There is a lot of the German aggressiveness but I am more reminded of American bands mainly due to the specific way of composition and performance, with a lot of variation and a lot of great riffs. The cover artwork is very good and instantly hints at a band that doesn’t take itself too seriously; obviously they have a lot of humour in their lyrics, as you can see from titles like ‘On Your Mother’s Face’, ‘Sodomize A Priest’ or ‘God Is A Shemale’. Often this approach will involve serious stuff, like society and religion, but sometimes it’s humour most of all, like in ‘Epic Hangover’, beer being one of the favourite typical themes, exactly like for so many 80s bands. So you get the picture… all of this reminisces primarily of those Thrash or even Crossover bands of the time with tongue in cheek attitude and fun cover artworks, mixing it all with social awareness and delivering it within killer violent music… stuff like TANKARD, ACID DRINKERS, WEHRMACHT and so on. There are even two songs sung in their native Spanish, ‘Escoria Humana’, one of the best tracks on the album, and ‘El Cepo De Mi Coche’, inspired in a local children song (‘El Patio De Mi Casa’). There is nothing new here as is now so often the case, but the songs are great, fun, well composed and well played. The production is fine as well, even though the drums could sound a bit more organic. I also do think the very hoarse vocals might benefit from a bit more variation, and I did wish for a few more solos, mainly when these guys can clearly play well, but even so, when I got to the end of the album I had to press repeat. A strong Thrash Metal work from a scene that seems to have come to accept that the purpose now is not to really innovate… the point in Thrash has become to create killer Thrash albums. I, for one, am totally fine with it. And so seem to be EXEKUTION, who are doing a great job at it. Check them out at www.facebook.com/exekutionband