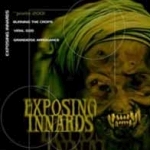 The Dutch Death Metal scene is definetly back on the map, after the success of bands such as SEVERE TORTURE, GOD DETHRONED, CENTURIAN and others. The Dutch scene has put its stamp on the way too crowded Death Metal scene. Now we have seemed to found a new band, EXPOSING INNARDS. Their 3 track promo CD sounds very promising, brutal Death Metal the way it is supposed to be done. Complex riffs, decend grunts, heavy breaks and a lot of tempo changes. Due to this their promo is everything but boring. It often reminds me of MORBID ANGEL but of course this level can not be reached by doing one demo, but I have good hopes for them in the future. The demo CD contains three studio tracks that have a decend sound quality and as a special bonus we get a live track as well. Four tracks – thirteen minutes and a nice full color layout. My first impression of this band is definetly a pleasant one and hopefully we get to hear more of them very soon. If you are into this kind of Death Metal and wish to find a new band then order this piece of quality Metal by sending a mail to their drummer Mick (evil_micky@hotmail.com) or by checking their website at http://snap.to/exposinginnards You won’t be dissapointed!