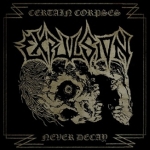 Nowadays, one might think every single obscurity released in the golden era of Swedish Death Metal has been re-released by now, but nay! Every now and then you are surprised to see another gem exhumed and being made available in remastered form. EXPULSION, originally formed around ’88 and featuring TREBLINKA / TIAMAT members are such a case and while their two full-lengths are rather forgettable affairs, the band’s demo era was regularly namedropped over the years by artists within the Death Metal circuit (which led me to buy that “Vociferous & Machiavellian Hate” split CD at some record store in Paris, well MYTHOS (FI) was also a good reason…) and now finally has been collected, remastered and restored on a proper over 60min long compilation. The 1989 demo “Cerebral Cessation” kicks off this compilation and offers morbid and atmospheric, primitive Death Metal not too far away from TREBLINKA’s cult material or the amazing TIAMAT debut. Simple riffing, whispered, possessed vocals, a few forlorn acoustic guitar sections, stoic drumming and an overall vibe hardly comparable with the sonic assault of NIHILIST or DISMEMBER successfully develop an undeniable charm any ancient Death Metal lunatic will immediately succumb to. Also, the sound is transparent and doubtlessly enjoyable despite its basic production. Then, the four tracks from the “Veiled In The Mist Of Mystery” demo (also put out in 1989) follow and continue in this vein while sounding slightly rawer. Tracks 11 ‘Soul Upheaval’ and 12 ‘Lain Hidden’ (the latter also appeared on the 1993 “A Bitter Twist Of Fate” EP in a different version if I’m not mistaken) were taken from a previously unreleased Sunlight session 1990 for a 7” single and come across a bit more sorted and refined than the previous two demos yet stylistically remain totally up on par: dark, mysterious yet also with the necessary dose of aggression. Perfect! The closing title track was from an old tape compilation called “Hymns Of The Dead” but remains the most unspectacular part of this compilation due to a very raw recording. Overall, despite its rougher sound EXPULSION fits ideally between early TIAMAT and MEFISTO maybe with a touch of early UK Doom / Death and should prove a total pleasure for those of you, who happily dig out Scandinavian Death Metal that does NOT particular sound like the “big 4” (ENTOMBED, DISMEMBER, UNLEASHED, GRAVE). Artwork by Erik of WATAIN is another plus worth mentioning. Recommended! A teaser song for the undecided can be found here. All further info at www.facebook.com/pages/expulsion/191657390849316, www.vicrecords.com