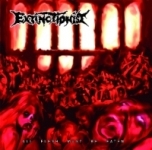 EXTINCTIONIST
All Flesh Must Be Eaten
(self-financed)
9:25min

To offer recordings for free is getting more and more common. Should we as music fans consider this as a good or a bad thing? For the record labels the answer is quite clear. Especially the bigger ones, complain about decreasing record sales since the last years due to the high numbers of illegal downloads and some even forecast the ending of the medium "compact disc". I wouldn’t go that far, as especially in the Metal genre itself the need of original recordings will always be there among the true and honest fans. Nevertheless I understand that problem the labels have. Funny enough we often recognize that the smallest gear in the gearwheel (the bands) don’t care that much about this evolution, some of them even use it as an advantage and promotion (for sure this is only half the truth). I think of the band TORTURE DIVISION who offered all of their releases so far as free download. I’m not sure if the German Death / Grind band EXTINCTIONIST who recently released their first demotape / EP and offer it as a free download, too, are going in the same direction. The band contains 2 members of the old school Death Metal and Lovecraft-fans PHILOSOPHER. Quite experienced musicians are involved here and the sound on this recording is simply amazing. It’s recorded in a new and upcoming studio which is in a way owned by some of the band members here.. Bands looking out for a good studio here in Germany should check out the homepage (www.kameaudio.com) – perhaps a studio you are looking out for. Death Metal with Grindcore elements, is offered here and surprises with nice ideas, good musicianship, cool (but not new type of) intros and pretty good songs. It’s recognizable that this is their first recording still I would like to recommend this release to each fan of this musicgenre. The download offers 7 songs including the coverartwork and is available here: www.mediafire.com/?ymzmqyynjhz. The playing time of 9 minutes is rather short on this recording but the band is planning an album for 2010. So keep this band in mind and check out this release if the Death / Grind genre appeals to you and watch out for the next release in 2010.