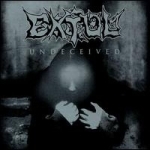 Progressive Extreme Metal without any borders! I’d describe EXTOL as a progressive Deathrash band, but that’s not the whole truth. Very often they remind me of an angry brother of NEVERMORE. Sometimes you get great melodic vocals (e.g.: track 4) but usually it’s high pitched extreme singing. This range allows highly emotional moments, sometimes supported by a violin. In combination with some cool doomy parts I had to think of MY DYING BRIDE every now and then. You really have to listen to this CD quite a few times, but that’s all right with me as the mixture turns out to be thrilling, sometimes a little confusing, though. In case you’re open minded (at least to some extend) and don’t despise melodies in general plus if you can cope with a certain amount of breaks, I can recommend this CD whole-heartedly, even though not all of the songs turn out to be true killers… This record rocks a lot and in case they like playing live I’d say they might gather quite a die-hard following. www.durling.com/extol